You are here: Home / More about Insulin Treatment for Type 1 Diabetes

Insulin Treatment of Type I Diabetes

In non-diabetic people, insulin is automatically released from the pancreas in response to a rise in blood glucose following a meal. This allows the glucose to be taken up by the body’s cells where it is either used straight away, or stored (mostly in the liver or muscles) for later. So, in the presence of insulin, glucose is removed from the blood and the blood glucose level drops again. Just the right amount of insulin is produced to keep the blood glucose level within normal limits. In addition to this, small amounts of insulin are continuously produced between meals and overnight, in order to keep the body ticking over. 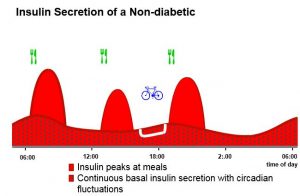 People with Type 1 diabetes produce no insulin and    therefore depend on insulin injections to stay alive. (People with Type 2 diabetes usually produce some insulin and many are treated with diet and tablets that enable them to make better use of the insulin that they produce.) The aim of diabetes management is to keep blood glucose levels close to normal. For those people who require insulin, this means coordinating insulin injections with meals and snacks, whilst counterbalancing the effects of activity levels.

There are a number of ways in which insulin is used to treat people with diabetes:- 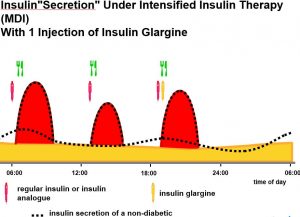 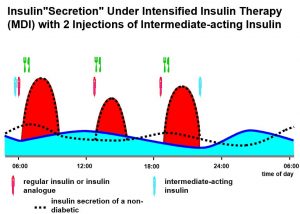 Rather than injecting the insulin, it can be supplied by a small pump, which is worn all the time. The insulin is delivered to the body through a fine tube with a needle or cannula that sits under the skin. The pump mimics the function of the pancreas in that it provides a steady supply of ‘background’ or basal insulin and extra spurts or bolus doses of insulin are given before eating. The basal supply of insulin through the day can be altered so that it is in tune with your own body’s individual needs. The basal insulin keeps the blood glucose levels stable in-between meals and overnight. The bolus doses are specifically tailored to food intake. With Insulin Pump Therapy there is no need to plan meals and activities around insulin injections. Although the pump does not measure blood glucose levels and produce insulin automatically – you have to test your own blood glucose and program the pump yourself – Insulin Pump Therapy is the most natural form of insulin treatment available today. 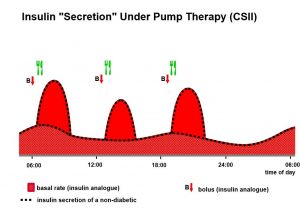